This is a superb paper on engineered optogenetic tools that shift wavelengths from the normal excitation wavelengths, which also have stability in vivo and have altered kinetics. They created both blue-shifted and red-shifted channels. The red-shifted activation of these channels is significant for many reasons. In particular the greater depth of penetration into tissue of the activation light. This will allow optogenetic targeting of neurons in larger volumes. Also, since the activation wavelengths have been shifted away from the traditional part of the spectrum (blue or red shifted), these new channels can be used in combination with existing optogenetic approaches. The new channels can also be switched from open to closed states by application of different light wavelengths onto the samples. In this paper they characterised them in three phases; in vitro cell cultures (HEK cells), then neuronal organotypic slice cultures (CA1 pyramidal neurons), then in vivo in Drosophila fruit fly larvae and tested the channels’ in an overtly functional assay.

The blocking of neuronal activity was tested through a range of wavelengths from 365nm to 635nm, and at various intensity magnitudes (ranging from 0.001 to 10mW/mm2 Fig4-J) utilising the flexibility of the 16 channel CoolLED pE-4000. Even in situations where massive over-expression led to mis-localisation away from the membrane, there were no effects on neuronal function. Therefore, proving that these optogenetic tools are suitable for traditional neuronal slice physiology. The light dependent shift in neuronal silencing (rheobase shift) was different between the two main engineered optogenetic channels used but at the high light intensities capable from the pE-4000, both gave significant results.

Finally, the research team studied behavioural modulation in-vivo; namely altered rolling response to mechanical stimulus (nociception) and locomotor response in fruit-fly larvae. Again they used the flexibility and specificity of bandwidths available in the pE-4000 and have produced some excellent results. Interestingly, blue light caused altered rolling in Wild Type (non-optogenetic) larvae but the response in the 545-585nm range and saw a clear and significant reduction. Inhibition of locomotion could be achieved for a persistent time after a brief pulse of light (460nm pE-4000), and this inhibition can be reversed by activation of a different wavelength (595nm pE-4000). It is particularly interesting that these engineered channels can be controlled this way.

In Summary: This paper is a beautiful example of taking a concept of engineered optogenetic tools from single cell expression for proof of concept, through traditional cell culture work, and all the way into in-vivo characterisation of an overtly measurable response.

For further information on this research paper, click here. 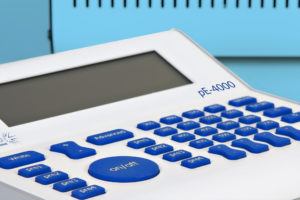