Research Labs have traditionally used Mercury and Metal-Halide light sources for fluorescence microscopy over the past years. However nowadays, microscope systems are increasingly being equipped with LED illumination.

LEDs overcome the disadvantages of the older light sources, for example, constant bulb changes and alignment, intensity drop over time, warm-up time to achieve stability and cool down periods to maximise lifetime. In addition, for fast multicolour acquisition or multicolour time-lapse microscopy, additional motorisation is required on the older lamp based systems but not on LED equipped systems.

There are also serious environmental and health-hazards to consider. Mercury is toxic to humans and care must also be taken to shield eyes from the strong deep-UV and IR wavelengths emitted.  For these reasons, many institutions are insisting on a change from old mercury to modern LED’s on existing microscopes.

More practical reasons to switch to LEDs are the cost of ownership and the ability to reproduce data. Moving to LED light sources easily repays the initial cost in a short time, by not having to constantly replace bulbs.

When quantifying data produced by a microscope equipped with a mercury-lamp, the rapid and constant intensity drop is a major concern. During the lifetime of a typical bulb (either 200 or 300 hrs), the intensity drops off from 100% to 40%.  The illumination intensity at the start of an experiment can be 20% more than at the end, only a few days later. 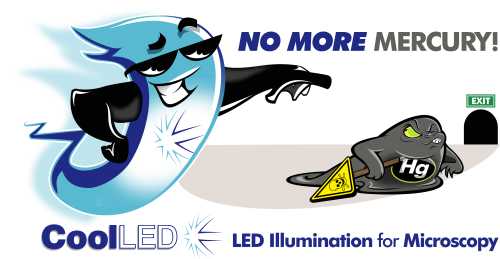