In the early days of LED adoption for fluorescence microscopy, many people saw LED’s as simply a light source. Therefore, the available LED wavelengths were geared towards traditional fluorophores. However, recent systems have offered greater flexibility that can open up other fluorophore options. One fluorophore example is quantum dots, which have the advantage of being bright and having greater stability compared to other fluorophores. In this recent paper by Dr Sandrine Prost and colleagues at the University of Edinburgh, they performed a detailed quantitative study of LED illumination compared to Arc lamps to highlight the ideal light source for acquiring quality data using quantum dots. The paper presents some interesting findings that are relevant to multiplex staining using Qdots and are also relevant to other image capture and analysis protocols.

Auto-fluorescence is a major concern for quantitative imaging of tissue sections. Therefore, in this paper, they used spectral un-mixing and a tuneable imaging system (spectral camera) to separate auto-fluorescence from the real signal.

Having demonstrated that LED illumination had significant advantages, the paper then compared different models of LED light source; white light and selectable wavelength systems (pE-2, pE-4000). The ability of the pE-4000 to select a range or indeed a grouping of narrow monochromatic wavelengths provided significant advantages over a “white light” source. Another advantage of selectable monochromatic light is the reduced bleed through between channels. 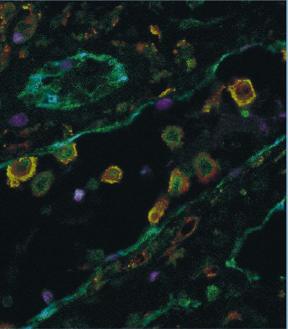 In summary, this thorough and detailed study indicates the specific advantages of LED illumination over traditional Mercury arc or Metal Halide lamps. It also highlights the advantages of selectable channel LEDs, that produce narrow band monochromatic light, over “white light” LED systems. Indeed, the move of recent third generation “white light” systems to incorporate selectable channels and in-line bandwidth filters (like the pE-300ultra) will allow the best of both worlds.

For further information on this research paper, click here.