Why you can’t teach an old worm new tricks 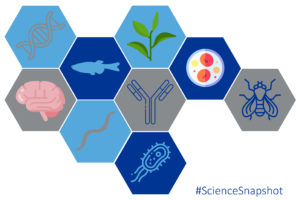 Some of us know all too well how it becomes harder to learn new skills as we age. We recently came across a fascinating research paper which looks into the reasons why, because understanding the patterns of cognitive decline may then reveal ways in which this process could be slowed.

Previous discoveries suggested a link between increased neural activity and sensory input, and reduced memory formation and ability to learn. The researchers put this theory to the test in vivo, in the well-characterised C. elegans.

A useful feature of C. elegans is that it favours optimum O2 concentrations and will speed up its movements in an environment with unfavourably high O2 concentration. This measurable output is mediated by O2-sensing neurons, which increase their activity in response to long-term increased O2 levels.

The worms can also demonstrate plasticity: a worm’s movement response to changing O2 concentration differs depending on whether they were initially cultured in an optimum or high oxygen environment. But this can be altered by a temporary change in O2 concentration, and this assay readout indicates plasticity; or the worm’s ability to learn.

What did the study find?

As worms age, plasticity was lost faster in worms exposed to higher sensory input (i.e., cultured at higher O2 levels). Measuring Ca2+ in the O2-sensing neurons also found that neuronal activity was higher in these worms.

The CoolLED pE-4000 Illumination System was used for ratiometric calcium imaging with the genetically encoded yellow chameleon YC63.60 fluorophore, with excitation at 435 nm for 300 ms. The high-speed control and range of wavelengths available makes the pE-4000 a versatile system for labs using a wide range of fluorophores. For labs specialising in Fura-2 for calcium imaging, the pE-340fura offers 340 and 380 nm wavelengths alongside everyday fluorescence applications. (And don’t forget the pE-800fura coming soon!)

Significantly, further experiments using a range of techniques such as optogenetics and RNAi confirmed the hypothesis that neuronal activity and Ca2+ signalling dictate plasticity loss with age in response to O2 exposure.