10th Anniversary and CoolLED’s on the move

CoolLED is preparing to celebrate its 10th anniversary as the company which first introduced LED illumination systems to the microscopy world.

After several years of intense research, the company launched its first illumination system with three discrete wavelengths in the summer of 2006 at the Microscience meeting in London.  This was met with fantastic interest from the research community as LEDs offer stability, long-life and superior control over the mercury-based illumination it has replaced.  From its first offering, CoolLED has led the way in fluorescence microscopy.  Its most recent product, the pE-4000, offers the greatest flexibility and compatibility available with 16 wavelengths included to match the demands of almost every users’ application.

With increased demand and acceptance of LED illumination, CoolLED is pleased to have secured additional premises at its Andover facility to provide more Manufacturing space for its pE-Series LED Illumination Systems and configure enhanced R&D laboratories.  The company is running a number of Research and Development programmes as well as planning further illumination products.  During August, staff and equipment will be moved into the new area.  This will allow all departments more space in which to operate and expand. 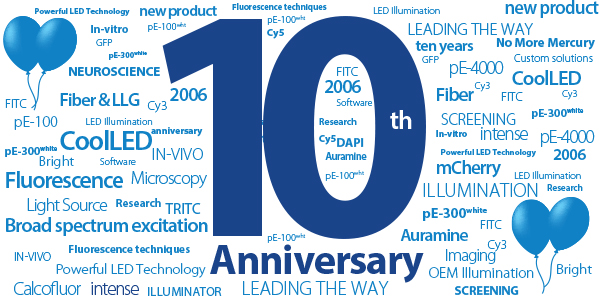