At Eötvös Lóránd University we investigate activity-dependent forms of synaptic plasticity and homeostatic regulation of intrinsic excitability of mouse hippocampal neurons. Using whole-cell patch clamp technique we can record the membrane potential of channelrhodopsin-transfected single neurons during optical stimulation. Here we demonstrate the voltage responses of such neurons under stimulation with flickering light pulses delivered by the CoolLED pE-4000 device. The recordings were performed in dissociated mouse embryonal hippocampal cultures, isolated on E18 and cultivated up to 15 days in vitro. 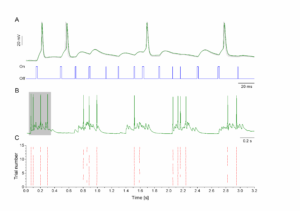 Panel A shows the membrane potential of a hippocampal neuron (green trace) as it is driven by brief pulses of light (blue trace). The gating and duration of light pulses is controlled by computer via TTL input of the CoolLED device. Brief light pulses usually produce subthreshold voltage fluctuations resembling excitatory postsynaptic potentials. Longer light pulses can elicit action potentials appearing as sharp peaks in the membrane potential trace. Panel B shows the membrane potential responses under a longer period of such stimulation (3.2 s). The grayed section is zoomed in A. Repeating the flickering light stimulus pattern 15 times we obtain the peri-stimulus scatter plot shown in C. Here, red ticks indicate the arrival of action potentials in the repeated trials. The reliability and precision of spike timing is remarkable during this protocol. 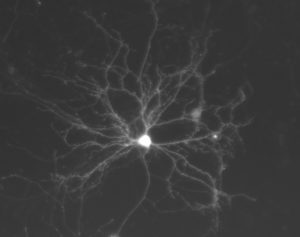 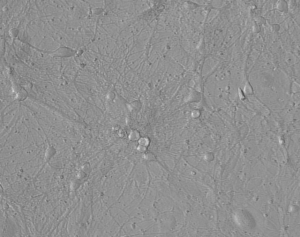 The CoolLED pE-4000 device performed excellently in our electrophysiological experiments and provided us a convenient way to investigate the integrative properties of hippocampal neurons in great detail.