The two most important parameters in objective design are the numerical aperture (which determines the fine detail in the image) and the magnification, which decreases the area that is imaged. For more than 100 years the magnification of objective lenses was kept between 40 and 70 times the numerical aperture. It was thought pointless to make this number lower, since, even though a larger field could in principle be seen the detail in the image would then be too fine to be seen by the human eye.

The Mesolens has a magnification-to-N.A. ratio of 8, achieved by a total redesign, in which great precision is required to achieve the correction of chromatic and other aberrations. This was made much more difficult by the need to use large optical elements (its magnification is x4 and NA 0.5 and working distance nearly 3 mm, multi-immersion): aberrations scale with the diameter of the lens.

Although modern cameras can record more detail than the human eye, the main reason for going through this marathon of design and construction was to make the Mesolens able to discriminate depth. This allows it to be used for 3-dimensional imaging (e.g. confocal and multi-photon optical sectioning) for which existing low-magnification objectives are almost useless. The Strathclyde Mesolens was developed for imaging mouse embryos 5mm long in their entirety by confocal scanning microscopy, yielding 3D datasets in which all of the millions of cells present are shown with sub-cellular resolution (<1 micron).

The Strathclyde ‘Mesolab’ facility, supported by the Medical Research Council and the University of Strathclyde, has already been used by researchers from the MRC Human Genetics Unit in Edinburgh and the Victor Chang Cardiac Disease Institute in Sydney, Australia, in connection with the world-wide programme of screening human genes for congenital diseases by the use of transgenic mice.  As well as facilitating embryo research, the Mesolens is expected to find applications throughout science, since, as well as having unprecedented depth resolution for a wide-field lens, it has 20x the light throughput of a standard NA 0.1 objective of the same magnification, permitting the imaging of faint bioluminescent signals and the use of far lower intensities to excite fluorescence, meaning less photo-damage to sensitive living material.

Because of its large field and high light throughput, the Mesoscope is particularly well suited to the use of a light-emitting diode as light source for the excitation of fluorescence: it can utilise the emission from the full area of the diode efficiently. The system shown in the photograph uses a CoolLED pE-4000 with giant custom filters specially designed by Chroma for the emission spectra of the multi-wavelength pE-4000 and the large aperture of the Mesolens. The Strathclyde system is configured for both ultra-high (>200 megapixel) cameras and 20k x 20k pixel laser scanning microscopy. 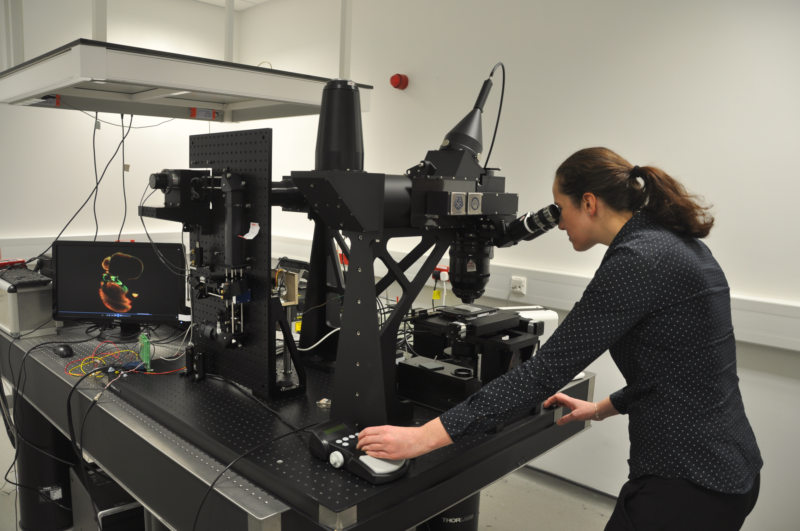 In this photograph, Professor Gail McConnell is shown using the Mesoscope, a novel microscope which she and her University of Strathclyde colleagues Dr Johanna Trägårdh and Dr John Dempster, together with Dr Brad Amos FRS and Mr Es Reid (Cambridge) have developed.