Action potential (AP) firing rate and rhythm of sinoatrial nodal cells (SANC) are controlled by synergy between intracellular rhythmic local Ca2+ releases (LCRs) (“Ca2+ clock”) and sarcolemmal electrogenic mechanisms (“membrane clock”). However, some SANC do not fire APs (dormant SANC). Prior studies have shown that β-adrenoceptor stimulation can restore AP firing in these cells. Here we tested whether this relates to improvement of synchronization of clock coupling. We characterized membrane potential, ion currents, Ca2+ dynamics, and phospholamban (PLB) phosphorylation, regulating Ca2+ pump in enzymatically isolated single guinea pig SANC prior to, during, and following β-adrenoceptor stimulation (isoproterenol) or application of cell-permeant cAMP (CPT-cAMP). Phosphorylation of PLB (Serine 16) was quantified in the same cells following Ca2+ measurement. In dormant SANC LCRs were small and disorganized at baseline, membrane potential was depolarized (−38 ± 1 mV, n = 46), and ICaL, If, and IK densities were smaller vs SANC firing APs. β-adrenoceptor stimulation or application of CPT-cAMP led to de novo spontaneous AP generation in 44 and 46% of dormant SANC, respectively. The initial response was an increase in size, rhythmicity and synchronization of LCRs, paralleled with membrane hyperpolarization and small amplitude APs (rate ∼1 Hz). During the transition to steady-state AP firing, LCR size further increased, while LCR period shortened. LCRs became more synchronized resulting in the growth of an ensemble LCR signal peaked in late diastole, culminating in AP ignition; the rate of diastolic depolarization, AP amplitude, and AP firing rate increased. ICaL, IK, and If amplitudes in dormant SANC increased in response to β-adrenoceptor stimulation. During washout, all changes reversed in order. Total PLB was higher, but the ratio of phosphorylated PLB (Serine 16) to total PLB was lower in dormant SANC. β-adrenoceptor stimulation increased this ratio in AP-firing cells. Thus, transition of dormant SANC to AP firing is linked to the increased functional coupling of membrane and Ca2+ clock proteins. The transition occurs via (i) an increase in cAMP-mediated phosphorylation of PLB accelerating Ca2+ pumping, (ii) increased spatiotemporal LCR synchronization, yielding a larger diastolic LCR ensemble signal resulting in an earlier increase in diastolic INCX; and (iii) increased current densities of If, ICaL, and IK.

The pE-300white offers TTL triggering, individual channel control and software integration. This makes it ideal for fast, accurate and precise measurements such as in this application where Fluo-4 is used for calcium measurements. 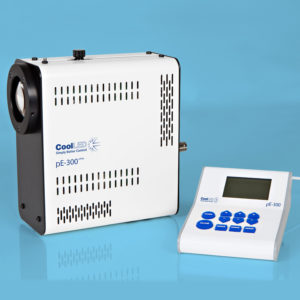