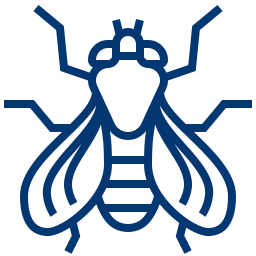 Applications benefiting from fast, efficient LED illumination vary from fluorescent screening of modified genotypes in larvae, to more complex optogenetic control. Over 100 papers working with Drosophila exist (view on PMC) which have utilised CoolLED Illumination Systems, and here we have summarised two:

These authors set out to understand how one part of the Notch signalling pathway is controlled in different organisms, which could be significant for cancer research. This signalling pathway is highly conserved, and it is likely if the same rules apply for homologues in the mouse and fly, they may also apply to the human Notch pathway. It was previously known that the Drosophila Suppressor of Hairless (Su(H)) protein is dependent on the Hairless protein (H) to enter the nucleus, and therefore be able to act as a transcription factor.

In this study, the authors set out to discover whether the mouse homologue, RBPJ, is also subject to the same control. For this, they constructed a Drosophila model expressing the mouse homologue, RBPJwt instead of Su(H). With a GAL4/UAS expression system, the desired larvae homozygous for RBPJwt picked out from the heterozygous larvae by the lack of a GFP tag.

The CoolLED pE-300white Illumination System on a Leica MZ FLIII UV stereomicroscope is ideal for such fluorescent screening of Drosophila larvae. The blue LED channel can be used individually to enhance the GFP contrast, and the irradiance can be easily balanced with the control pod for optimum illumination.

An in vivo functional assay was applied to Drosophila larvae for the third stage of characterisation, assessing altered rolling response to mechanical stimulus (nociception) and locomotor response (Figure 6). The flexibility of the CoolLED pE-4000 Illumination System allowed the authors to apply a highly controlled range of wavelengths and irradiance levels. Interestingly, blue light caused altered rolling in Wild Type (non-optogenetic) larvae but the response in the 545-585 nm range saw a clear and significant reduction. Inhibition of locomotion could be achieved for a persistent time after a brief pulse of light (460 nm), and this inhibition could be reversed by activation of a different wavelength (595 nm). It is particularly interesting that these engineered channels can be controlled in this way.

In summary, we recommend reading the full paper as an example of taking an innovative concept from proof of concept all the way into in vivo characterisation of a measurable response.

Do you work with Drosophila and use a CoolLED Illumination System? We’d love to hear about your research!